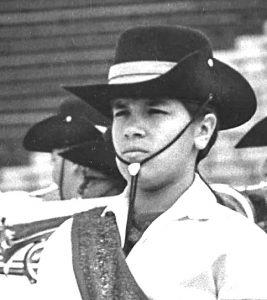 Cherokee Merino-Baer is considered a drum corps pioneer, one of the most significant snare drummers of the late 1960s and early 1970s. Her mentors along the way include many well-known rudimental drum instructors, including Ray Luedee, Earl Sturtze, Jack Lester and Eric Perrilloux.

As a member of St. Rita’s Brassmen in 1973, she was the first woman to march in a nationally contending co-ed snare section, alongside future World Drum Corps Hall of Fame member John Oddo.

As a snare drummer and section leader with N.D.-ettes All Girl Drum and Bugle Corps (founded in October 1963 by Notre Dame Girls High School of Bridgeport, Connecticut, going inactive in 1973) she was Massachusetts State snare drum state champion, Eastern States champion and World Open silver medalist all in 1968. Her drum quartet won first prize in World Open Quartet contests in 1967 and 1968.

She began drum and bugle corps activity playing cymbals and tenor drum with Norwalk Hot Shots from 1961 to 1966. She played snare with Emerald Cadets of New Haven and Milford Shoreliners before joining St. Rita’s Brassmen. She was drum instructor of the N.D.-ettes and Bengal Lancers in the early 1970s. She was a percussion judge in the Northeastern circuit in 1978.

Cherokee Merino-Baer passed away in August, 2017.