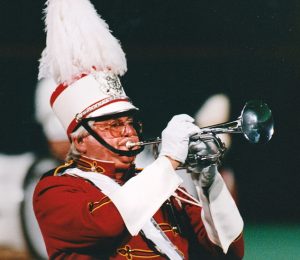 A charter member of the New York Skyliners Alumni Corps, Tim Boardman has been active with many of the best-known northeastern corps since 1958 when he began playing with Spartans of Newark, New York. Over the following 50 years, he performed on soprano horn with: Shortsville Shamrocks from 1959

From 1998 to 2004, he was among a group of individuals from Hawthorne Caballeros, Reilly Raiders and Yankee Rebels who travelled south to perform in concerts with Florida Brass, following an invitation from World Drum Corps Hall of Fame member Dick Burns, a mutual friend.