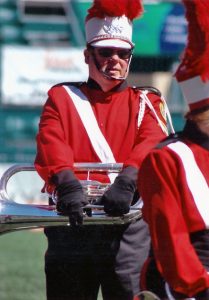 Jim Stanko is a member of the New York State Drum Corps Association Hall of Fame who performed in the horn line when New York Skyliners won the 1982 Drum Corps Associates (DCA) world championship. He was director when St. Joseph’s Brigade of Astoria, New York won the state championship from 1984 to 2000. Starting in 1957, he dedicated 50 years of service to St. Joseph’s Brigade including performing, instructing the color guard, fund raising and acting as business manager and director. His extensive involvement with New York Skyliners and Skyliners Alumni includes performing on baritone and euphonium horn. He has also served as assistant director, director, archivist and historian with Skyliners Alumni. He has served as vice president and president of the New York State Drum Corps Association and as vice president of the North East Drum Corps Association. He served in the United States Army in Vietnam from 1966 to 1968.