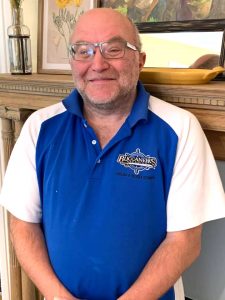 Dan Wildonger has helped keep the wheels moving for the Reading Buccaneers since he joined the organization in 1997. While he played mellophone or baritone in the horn line for the following 10 years, he was also active with administration duties. The Buccaneers have won 13 of their total 17 DCA World Championships while he has been contributing on the field and in administration duties. These include six undefeated championship years from 2005 to 2010; four titles from 2012 through 2015 and three from 2017 to 2019. He served on the Buccaneers membership committee from 1997 through 2004. He became secretary to the board in 2005, remaining in that position until 2014. He has been the assistant director since 2015. Many of his contributions to corps activity are behind the scenes. He is often the person driving a truck, placing lines on the field or making sure water bottles are available to corps members, tasks completely separate from formal administration duties but just as important to keep the whole operation running smoothly.