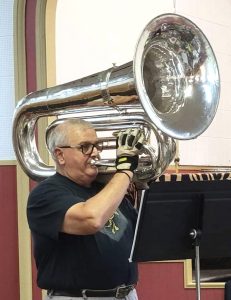 Dennis “Dino” Myers was a contrabass player with Reading Buccaneers when the corps won back-to-back DCA championships in 1979 and 1980. Off the field, he has been business manager for three different corps and since 2014 has been co-chair of Reading Buccaneers Alumni’s popular Music in the Mountains indoor show. He has been involved in drum corps activity for most of his life, since he was introduced to the activity in 1957 when at age 10 he joined the Pleasureville, Pennsylvania American Legion Post 799 parade corps. More than 60 years later, he still plays contrabass with two alumni corps: Buccaneers Alumni since 2010 and Hanover Lancers Alumni since 2014. He also played with Yankee Rebels Alumni from 1984 to 1992. He was business manager with York White Roses junior drum and bugle corps in 1970 and 1971; Reading Buccaneers in 1979 and 1980 and Buccaneers Alumni from 2014 to 2018. Before he switched to contrabass, he played bugle with York White Roses from 1964 to 1968, then performed with Yankee Rebels and Reading Buccaneers at various times between 1969 and 1982. He also supported marching arts activities during his years as marching and drill instructor with New Oxford, Whitehall, Dover and Penn Manor high school bands from the mid 1970s through the late 1990s. He was inducted into the Reading Buccaneers Hall of Fame in 2016.