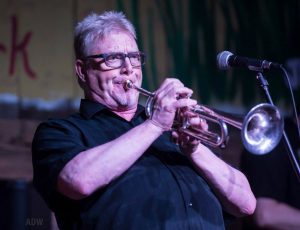 Donnie Allen has been involved with drum and bugle corps activity since he was a teenager playing soprano horn with St. Joseph’s of Batavia and Purple Lancers of Auburn, N Y. He was lead solo soprano player, arranger and brass instructor for Empire Statesmen in the early 1990s, during years the corps twice won the Drum Corps Associates (DCA) world title and was extending performance opportunities with overseas tours and winter stage concerts. In 1994, he received the DCA individual showmanship award. Since then, he has served as brass arranger and instructor for Syracuse Brigadiers, Mighty St. Joe’s Alumni and Rochester Crusaders. He has also been either brass arranger or instructor for the Cadets of Greece, Mighty Liberators of Rochester, Firebirds of Rochester, Rochester Northmen and Diplomats of Malden, MA. He has also served as music director of Eastridge High School and music director of Bloomfield High School Marching Band, both in Rochester. In 1992 and again in 1994, he was music director of the all-star group of more than 300 musicians who participated in the nationally-televised Macy’s Thanksgiving Parade in New York City. He is a member of the New York State Federation of Contest Judges.