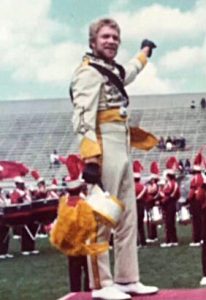 ‘Butch’ Anderson is best remembered as the flamboyant drum major of the New York Skyliners throughout the 1970s, ’80s and ’90s. He joined Skyliners in 1970, as a soprano player. He left for a season to march as drum major of Syracuse Brigadiers, then returned to New York in 1972 as assistant drum major behind Walter Winkelman. His early music education began in the fourth grade, with teacher Brad Longdo, and continued through the end of high school. He was also a solo soprano player, horn instructor and show co-ordinator with Skyliners. He previously played a horn with both the Schuylerville Green Sabres and the Interstatesmen, of Troy, NY and Pittsfield, MA, and marched as drum major with both the Marksmen and Syracuse Brigadiers. He was horn instructor for many corps, notably Pittsfield Skyhawks, Pittsfield Pom Poms, Saratoga Hurricanes, Emerald Knights, Muchachos and Johnstown Patriots. He served as show co-ordinator for the Skyliners during two separate periods in the 1980s, and helped institute a contest in Albany NY organized by a group of lawyers, called Law, Order and Justice.