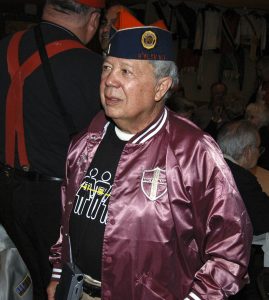 Bob ‘Kid’ Bellarosa spent a lifetime in the drum and bugle corps community, participating and contributing in many areas of the activity stretching across 70 years from his first involvement as a young boy in 1942 to his longstanding duties as publisher of Eastern Review and Heritage magazine for more than 50 years, from 1956 until his passing in 2011. Along the way, he played French horn with both arch rivals New York Skyliners and Hawthorne Caballeros and several well-known junior corps of the 1940s and 1950s. He constantly promoted the value of drum corps involvement as a recreation outlet and educational activity for youth especially in communities and neighborhoods where teenage programs were scarce.

He founded the Blessed Sacrament Alumni Corps in 1990. He also founded and operated the Drum Corps Hall of Fame and Museum in a four-storey building in Brooklyn, packed with pictures, trophies, old uniforms and other memorabilia to help publicize the individuals and groups who were the leaders of the activity. For many years, he served many groups as a roving instructor who neither asked for any fee, nor accepted money for teaching. He was a member of the Buglers Hall of Fame, a highly skilled mid-range brass player who won more than 50 individual competitions at the circuit, state and national level. He was a fierce competitor in another competitive sport: a Golden Gloves boxer who won 68 of 75 bouts. He was a familiar figure to thousands of fans at drum corps events: the short man in a Skyliners jacket and overseas cap adorned with his competition medals. He entered the drum and bugle corps world in 1942, carrying a rifle and playing drum with St. Helen’s Cadets. He moved on top play alto horn with Todd Memorial in 1945 then became a French horn player with Holy Name Cadets in 1948 and was voted Cadet of the Year in 1952. He moved to Edison Post junior corps in 1953 and then Our Lady of Grace Lancers in 1954. Over the following 15 years he played French horn with Skyliners for 13 years, moved to Caballeros for a couple of years then returned to Skyliners.