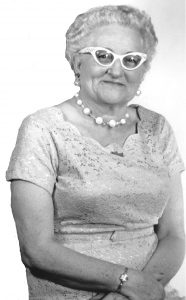 Florence Bernert, affectionately known as ‘Mrs. B’, was the head chaperone from the time of the founding of the Audubon All Girl drum and bugle corps in 1938 to its demise in 1977. When the corps was incorporated, in 1948, she became president and served in that position for the entire remainder of the time the corps existed. She was the second mother to many of the girls, a friend to all and a great inspirational leader. Together with her husband Joseph Bernert, known as ‘JB’, they formed a strong organization, always surrounding themselves with good people. The World Drum Corps Hall of Fame has selected the Audubon Bon Bons as the best all girl corps of all time.