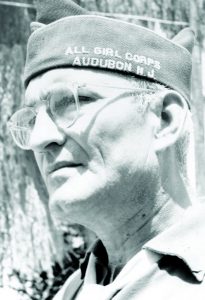 Joseph Bernert, better-known to many as ‘JB’, served in the United States Army, then became a New Jersey State Trooper and eventually joined the New Jersey Bell Telephone Company. He founded the Audubon All Girl drum and bugle corps in 1938. He served as corps director from that time until his death in 1974. He led the corps past many obstacles to significant achievements. The major achievement was proving that a girls corps could compete at the same high level as an all-boy corps, as shown by the Audubon Bon Bons’ many victories over the top corps in North America and their three runner-up finishes at the 1953 Veterans of Foreign Wars (VFW) national championships in Milwaukee, the 1957 American Legion (AL) nationals in Atlantic City and the National Dream Contest in Bayonne, NJ.