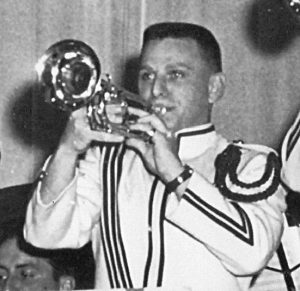 Hardy Carrasas was not only one of the top solo soprano players of the 1950’s and 1960’s, while with the Geneva Appleknockers, but widely considered one of the best show designers and marching and maneuvering instructors in those two decades and right through the 1970s as well. In all his years of instructing he designed more than fifty field shows for drum corps and nearly that same amount for competitive color guards. He instilled a love of the activity in many participants who went on to become top ranked instructors and judges, including several who are now members of the World Drum Corps Hall of Fame. The senior drum and bugle corps he taught from upstate New York were among the best in the country including the Geneva Appleknockers, Rochester Crusaders, Hamburg Kingsmen and the Utica Executives. The junior corps he taught were equally as well known on a national basis such as: the Geneva Appleknockers Juniors, St. Joseph’s of Batavia, Watkins Glen Squires, Auburn Purple Lancers, the Corning Barons of Steuben and the Owego Mello Dears All Girls corps. He judged all of the marching and maneuvering and color guard captions with the All-American Judges Association, the New York Federation of Contest Judges, and Drum Corps Associates (DCA), as well as judging many American Legion regional and national events. He also served as Chief Judge while with the New York Federation of Contest Judges.