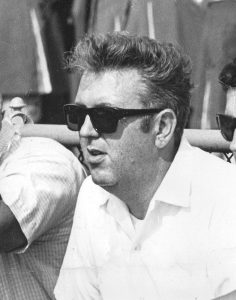 Ed Condon (Memorial) played fife and bass baritone horn with the John H. Collins Post fife, drum and bugle corps for almost 10 years, from 1947 to 1955, before beginning a long association with the Connecticut Hurricanes. Over the years, he played bass baritone, taught drill to the Hurricanes and several color guards.  He and long time partner Robert Woods introduced innovative new drill designs that helped move away from strict military patterns by using the color guard in the drill patterns to create free flowing presentations with high audience appeal.  He was a marching and maneuvering (M&M) judge with the All American Judges Association.  During the years he taught drill to the Hurricanes, the corps was undefeated in M&M during 41 consecutive contests.  The Hurricanes scored top drill marks during the first four Drum Corps Associates (DCA) championship tournaments.  During the years he taught drill to the Hurricanes, the corps won virtually every top contest of the day, including the Dream Contest, the Connecticut state championship, the World Open championship and the American Legion championship. He also taught the N.D.-ettes, World Open and U.S. Open All Girl championship corps.