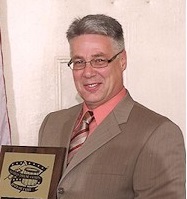 Steve Cooley began his career playing a baritone horn for the junior Appleknockers from 1961 – 1972. In 1970, he became their brass arranger and instructor. He has also arranged for the Dunkirk Patriots, Hamburg Kingsmen, Pittsburgh Rockets, Rochester Phoenix, Rochester Crusaders, Steel City Ambassadors, and Guelph Royalaires. He began a 25 year association as arranger and instructor with the Erie Thunderbirds in 1979. He was the arranger and instructor for the Syracuse Brigadiers when the corps became active again as a parade unit in 1991 and when they returned to the contest field in 1992. Steve also was brass instructor for the DCA World Champion Empire Statesmen in 2004. Steve has judged music with the New York All American Judges, New York State Federation of Contest Judges, DCA, and DCI.