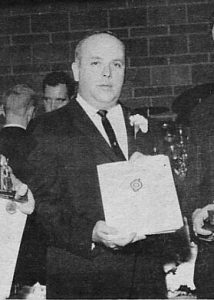 ‘Duke’ Ducharme was associated with corps in New England for more than five decades, beginning in 1933 playing bass drum and cymbals with Our Lady of Hope drum and bugle corps. From 1934 to 1939, he played cymbals, bugle and then marched as drum major of Veterans of Foreign Wars (VFW) Post 70 drum and bugle corps in Springfield, Massachusetts. He played bugle and twirled baton with American Legion (AL) Post 21 in Springfield when he returned to drum corps activity following World War II. He had been drum major of the 104th Infantry Band of the National Guard during high school, and marched as drum major of three different United States Army bands during his years of service. He organized the VFW Post 70 Dukes in 1952, and in 1956 organized the Springfield Marksmen. His other corps affiliations included the Targets, Olympians, Holy Name of Massachusetts, Patrick Triggs corps and Our Lady of Mount Carmel. He was also affiliated with the Massachusetts and Connecticut Fife and Drum organization and the Yankee Drum and Bugle Corps circuit. He judged for the All American Judges Association. He was a marching and maneuvering judge on the Northeastern Circuit for many years. He was also a regular contributor to the Drum Corps International (DCI) scholarship fund.