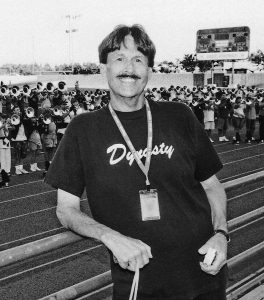 Mike Duffy started his drum corps activities on the west coast and worked his way as far east as Toronto, Ontario, performing as a top ranked soprano soloist and blazing new trails as a creative, exciting brass arranger and teacher. Several corps in Canada and the United States reached their highest level of performance when he taught them. He is the only brass arranger to have his corps finish in the top two positions in the Drum Corps International (DCI) finals in the same year. He began playing a soprano horn with Pasco Columbians in 1957. He also played with Portland Hawks, Seattle Thunderbirds and Seattle Shamrocks before aging out of junior ranks in 1965. During the early 1960s, he finished in the top three in the soprano individual category for three consecutive years at the Veterans of Foreign Wars (VFW) national convention. He was one of the first to creatively arrange brass music specifically for drum and bugle corps rather than simply transposing marching band charts. His career as brass arranger and instructor began with the Thunderbirds in 1963. He worked with Casper Troopers from 1968 to 1971. The Troopers won the VFW national title in 1970. In 1972, he arranged for and taught both Anaheim Kingsmen, who won the DCI title and LaCrosse Blue Stars, who finished second, their highest position ever. In 1974 DeLaSalle Oaklands of Toronto finished sixth at DCI and, known as Oakland Crusaders the following year, finished fifth, the highest placing of any corps from outside the United States at DCI finals. Other corps under his guidance included Seattle Marksmen, Seattle Imperials, Alberta All Girls and Anaheim Kingsmen Alumni Corps. He served as music director for the Columbians, Shamrocks and Alberta All Girls at various times from 1964 to 1978.