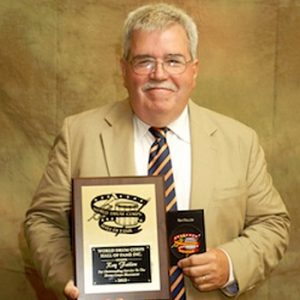 Ray Fallon is widely recognized as one of the most creative brass arrangers in the drum and bugle corps community. After serving in the United States Air Force (USAF) from 1970 to 1974, he arranged for and taught the brass sections of such well known groups as Bayonne Bridgemen, Milford Shoreliners, Crossmen, Boston Crusaders, Sunrisers, Archer-Epler Musketeers and Connecticut Hurricanes when they won the Drum Corps Associates (DCA) championship in 1981. He helped spark the alumni drum corps movement in 1978, serving as the coordinator, arranger and drum major for Archer-Epler Musketeers’ re-appearance at the 1978 Dream Contest. He has since worked with other alumni corps, including Baltimore’s Yankee Rebels, Boston Crusaders and the Bridgemen. He was inducted into the Hurricanes Hall of Fame in 2002, the Sunrisers Hall of Fame in 2004 and the Buglers Hall of Fame in 2006. He was also the DCA individual contra bass champion in 1992. He began his long association with drum and bugle corps activity playing baritone horn from 1960 to 1969 with Legionnaires Ocean Side junior corps. After his USAF service, he played baritone with Sunrisers from 1974 to 1976.