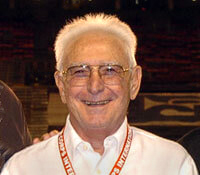 Corky Fabrizio has been a well-known horn soloist, music writer, instructor and show coordinator for corps in western New York state and beyond since 1950, when he was the soloist with Cortland Moose Lodge drum and bugle corps. He was the solo soprano player with Syracuse Brigadiers from 1954 to 1958, then left the activity while he served in the United States Army for two years. He returned to the Cortland Matadors as music writer for two years, then marched as drum major and wrote the music for Syracuse Brigadiers from 1963 to 1970. During the 1970s, he was drum major and music writer for Rochester Crusaders and Phoenix of Rochester. From 1985 to 1992, he was music writer and program director for the Crusaders. He was already writing music in 1950, for St. Joseph’s of Batavia, NY. He also wrote for Watkins Glen Squires in 1954, the Greece Cadets in 1958, the Casper Troopers in 1960, Auburn Purple Lancers in 1974 and Avant Guard of western New York in 1975. From 1979 to 1982, he wrote the music and instructed the horn line of Chicago Cavaliers.