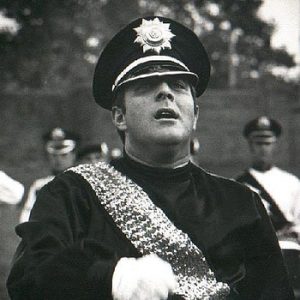 Joe Genero was an arranger and drum major for two of the top senior corps of his day: Hawthorne Caballeros and Connecticut Hurricanes. He began his drum corps career as a baritone horn player with the Mt. Carmel Cadets, of Brooklyn. He also marched with St. Joseph’s Cadets, of Newark, then went on to play with New York Skyliners before becoming arranger and drum major for the Caballeros and the Hurricanes. He also arranged and taught music with several well-known junior corps, including St. Vincent’s of Bayonne and St. Lucy’s of Newark. He arranged music for other corps in the New York area, including the Amboy Dukes, Ballentine Brewers and Rhode Island Matadors. His arrangements not only excited the crowd but were exciting for members of the brass line to play. His first arrangement for Hawthorne in the early 1960s was Flamenco Cha Cha, which was still being played by the Caballeros alumni corps more than 40 years later, producing the same enthusiastic response from audiences as when it was first performed on the competition field.