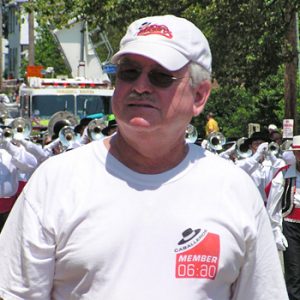 During Frank Gerris’ long association with Hawthorne Caballeros, the corps won five Drum Corps Associates (DCA) world championships up until 1992. He served as drill designer and instructor for the Caballeros, and provided the same services for the Woodsiders and Hawthorne Muchachos. He was drum major of Ballantine Brewers drum and bugle corps; drum major and soprano player with Woodsiders; and soprano player with Our Lady of Good Counsel. He was both brass instructor and director of St. Michael’s of Jersey City, NJ. He has judged many contests for marching bands, drum and bugle corps and color guards, including DCA and Drum Corps International (DCI) contests. His activity began in 1947, playing soprano horn with Our Lady of Good Counsel then joining the Woodsiders in 1956. His proposal that field judges use tape recorders while evaluating corps on the contest field was accepted by DCI, and his proposal to allow competing corps to start their routine at any position on the field was accepted by DCA. He has served as chair of the DCA marching and manoeuvring rules congress and helped re-write the DCA rule book.