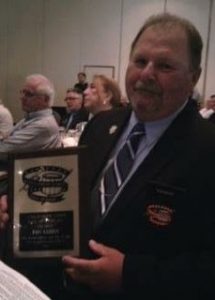 Ron Gehris has contributed to the success of the Reading Buccaneers by serving in positions ranging from marching in the honor guard to serving as corps director and president. In addition, he has driven the corps truck, donated food and purchased a new trailer for the corps. He was serving his first year as president and corps director when the Buccaneers won the Drum Corps Associates (DCA) championship title in 1979 then repeated their top place finish in 1980. He was named the DCA director of the year for both those years. The Buccaneers finished in the top five at DCA championship tournaments during eight of the 13 years he served as head of the organization. He also served as the Buccaneers business manager and financial manager at various times between 1976 and 1993. He was the guard coordinator from 1973 to 1981 and marching instructor from 1973 to 1984, winning a number of color guard titles, including best guard at the DCA finals. His participation in drum corps activity began in 1957 with the Kenhorst Green Hornets junior corps in Reading. Over the following five years he played soprano and French horn. He marched with the Junior Buccaneers from 1962 to 1966, playing soprano horn. In 1971, he marched with the Buccaneers honor guard, carried a flash flag from 1972 to 1976 and served as color guard captain from 1973 to 1980. He was named the Buccaneer of the 1980s by the organization and is one of 10 charter inductees in the Buccaneer Hall of Fame.