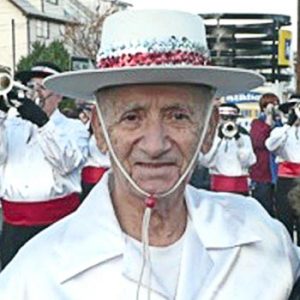 George Hayek started his drum corps activity in 1936 as a drummer with the Sacrted Heart Crusaders, a small church corps in Paterson, NJ. He became a snare drummer with St. George Cadets in 1939. He served in the armed forces during World War II, then resumed drumming with the new corps that Jim Costello and several former St. George Cadets organized in 1946: the Hawthorne Caballeros. He played snare drum with Caballeros until 1956, then played tenor drum until 1971. He taught both drumming and drill to a number of corps, and trained hundreds of young people who went to on to play with a number of top competing corps. From 1964 until 1992, he was a member of the Hawthorne Drum Corps Grand Prix planning committee, as chairman of the program/advertising book committee. He performed the same function for the 7th annual GAS Reunion committee. He has also been affiliated with the All Coast Color Guard Judging Association. He helped organize the Caballeros Alumni Corps in 1994, and was still marching with the group in 2006. He was inducted into the New Jersey Drum Corps Hall of Fame in 2001.