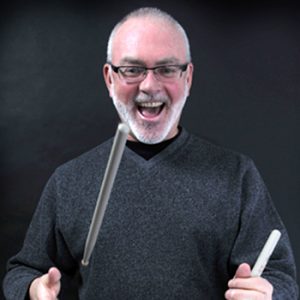 Thom Hannum took the pageantry of drum and bugle corps field shows to the Broadway stage, with the Star of Indiana’s Brass Theater production of “Blast.” Thom is a five time DCI champion for arranging and instructing the percussion sections of the Cadets of Bergen County, and Star of Indiana. He began his career playing snare drum with the Brookhaven Crusaders and the Crossmen. He served as arranger and instructor for the Crossmen from 1978-1983, also serving as program coordinator during most of those years. Thom is regarded as one of North America’s foremost percussion clinicians, presenting seminars and workshops throughout the United States and overseas. He is a product consultant and clinician for Avedis Zildjian Cymbal Company, Vic Firth, and the Pearl Corporation. He is an active member of the Percussive Arts Society and has served as president of the Massachusetts chapter. He has published a textbook/workbook titled “Championship Concepts for Marching Percussion.”