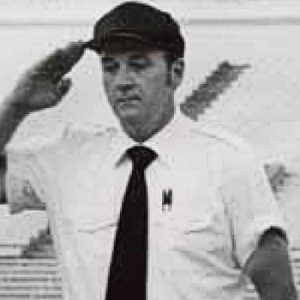 Earl Joyce’s first association with drum and bugle corps activity was as a drummer and drum major with the George Bell Junior drum and bugle corps from 1942 to 1951. He then became a drummer and drum major with the Chicago Cavaliers. He began instructing drums and teaching marching and maneuvering in 1949 with George Bell, then Cavaliers, then many other corps and bands until 1977. He was a judge with several associations, including Central States Judging Association (CSJA), All American and Midwest Color Guard, Drum Corps International (DCI), Drum Corps Associates (DCA), Catholic Youth Organization (CYO) and Winter Guard International (WGI). During his association with CSJA, he helped establish national judging and terminology standards in marching and maneuvering. His music training began in 1943, when he first played drums in the St. Angela grade school band. Later in the 1940s, he won several Veterans of Foreign Wars (VFW) individual and ensemble drumming titles at the Illinois state level and the national level.