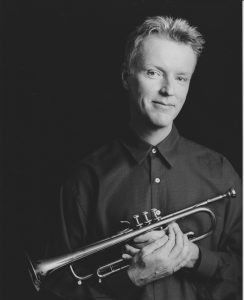 Jeff Kievit has been a high achiever everywhere he goes: on the drum and bugle contest field, in recording studios and Broadway theatres. Widely considered the premier soloist in the drum corps community during his years with Hawthorne Muchachos, he subsequently worked with many of the world’s best-known musicians; played trumpet for Broadway shows and produced a Grammy-nominated album. As trumpeter, arranger, composer and producer, he has worked mostly in New York and south Florida. Recent projects include performances with The Fab Faux, Bobby Caldwell, Chuck Mangione, Broadway shows and other live concerts. He also records for CDs, advertising jingles, TV themes and movies. He has toured with artists and groups including the Bee Gees, Sammy Davis Jr., KC and the Sunshine Band, Lyle Lovett, Ben E. King and Frank Sinatra. He has worked with such travelling shows as All Shook Up, Annie, Camelot, Chicago, The Drowsy Chaperone and Hairspray. He has performed in concert with Debbie Boone, Beatles 1964 Tribute, Garth Brooks, Dave Grohl, Norah Jones, Brad Paisley, Kid Rock, Darius Rucker and James Taylor. He was a member of the Muchachos for 15 years, joining at age 7 in 1960 when the corps had only 15 horns through the 1970s including years with 50 or more in the horn line. He played with the Hawthorne High School Band while still in elementary school. He earned a bachelor’s degree in music at the University of Miami after studying for a semester at the Manhattan School of Music. He won the Drum Corps International (DCI) individual soprano championship in 1974 and 1975, and was New Jersey State Champion the same two years. He was also DCI East champion in 1974. He has been a member of the Buglers Hall of Fame since 2006. He was the brass arranger and instructor for Muchachos from 1971 to 1977, including five years when he was still performing as soprano soloist. He was arranger and brass instructor with Hawthorne Caballeros in 1983 and again in 2000. Following his drum corps years, he played lead trumpet with Chuck Mangione’s band from 1978 to 2012. He was music director for the group from 2005 through 2012. He has performed on trumpet, flugel horn or piccolo trumpet on more than 20 top selling albums, featuring such artists as Stevie Wonder, Chuck Mangione, Tony Bennett, Shirley MacLaine, Gladys Knight and the Pips. Frank Sinatra, Luther Vandross, Lionel Richie, Lady Gaga, Bruce Springsteen and Burt Bacharach. He was the producer of Vanessa Williams’ Grammy-nominated album Star Bright. He also co-arranged, produced and played when she sang the national anthem at the beginning of the Super Bowl XXX football game played January 28, 1996 at Sun Devil Stadium in Tempe, Arizona. He has performed in seven Broadway shows, beginning in 1990 playing second trumpet in Oh, Kay! He played first trumpet in Kiss of the Spider Woman in 1993. With Steel Pier in 1997 and the original production of Ragtime the following year he played trumpet. He was lead trumpet in three shows: The Boy From Oz in 2003; La Cage aux Folles in 2004 and Chita Rivera: The Dancer’s Life in 2005. Broadway theatre refers to theatrical performances presented in 41 theatres, each with 500 or more seats, located in midtown Manhattan in New York City.