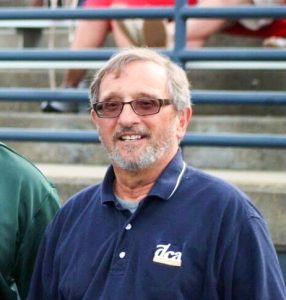 Richard “Dick” Eschenmann has dedicated 30 years of service to Drum Corps Associates (DCA), beginning in 1985 when he was one of the Westshoremen representatives at DCA meetings. As a representative of Grey Knights, he was part of the group that in the late 1990s proposed that DCA initiate a Class A division. He subsequently served as the Class A coordinator for three years. He became DCA business manager in 2004, serving in that position for the following 15 years. He was appointed following the untimely passing of DCA president Mickey Petrone. One of the major tasks during his tenure was insuring that all corps were in compliance when the American Society of Composers, Authors and Publishers (ASCAP) and Broadcast Music, Inc. (BMI) began requiring licensing fees from drum and bugle corps that performed music of artists represented by those groups. He simultaneously served as championship contest chairman for DCA’s Labor Day weekend tournaments in four different cities in three states: Scranton, Pennsylvania; Rochester, New York; Annapolis, Maryland and Williamsport, Pennsylvania. He previously served as the gate/field coordinator at DCA championships in Scranton and Allentown, Pennsylvania and Rochester and Syracuse, New York. His introduction to the administrative side of the drum corps activity came in the 1980s and ‘90s when he served as administrative assistant with Westshoremen, then with the Grey Knights. Prior to his term as DCA Chief Judge from 2008 to 2017, he was a tabulator at DCA contests. His performance career includes playing soprano with Les Saints drum and bugle corps from 1961 to 1963 and with Lebanon Entertainment Express in 1981 and 1982.