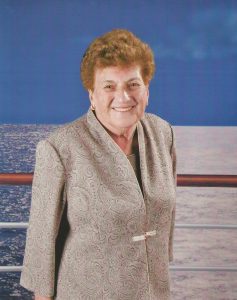 Louise Mayer has devoted her entire adult life to the drum and bugle corps community. In 1941, she joined the Joseph B. Garity American Legion senior fife, drum and bugle corps. In 1951, when her husband ‘Lefty’ joined the Garbarina-Mazarakos Skyliners, she also became a part of the Skyliner family. In 1965, the all-male Skyliner organization awarded her a lifetime membership, designating her as the “First Lady of the Skyliners.” She was instrumental in initiating the sale of corps items as souvenir tables, as a regular fund-raising project. She was closely associated with the operation of the Skyliners Alumni for more than a decade. She also served as the World Drum Corps Hall of Fame treasurer for 10 years. She has been involved with Drum Corps Associates (DCA) since the organization was formed in the1960s. She has served for a number of years on the board of governors of the Great Alliance of Seniors (GAS). Her late husband Henry ‘Lefty’ Mayer was a charter member of the Hall of Fame.