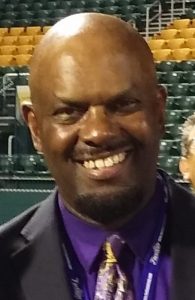 J. Frank Nash got off to a fast start in drum corps activity, beginning at age six, then playing snare drum for more than 40 consecutive years with various groups. His career as a drummer began in 1958, with the Royal Order of Odd Fellows, followed by participation in the drum lines of PAL Wynn Center Toppers, St. Joseph’s Patrons and St. Rita’s Brassmen. Moving up to the senior ranks, he drummed with New York Skyliners from 1973 to 1984. He served as player/snare instructor with the Bushwackers 1985-1993. From 1994 through 1999 he was with the Hawthorne Caballeros and in 2000 marched with the Syracuse Brigadiers, his final year of marching. He has been percussion instructor and arranger for many other corps since 1978, including Hawthorne Caballeros, New York Skyliners and Atlanta Corps Vets. As a corps member, he has won nine Drum Corps Associates (DCA) titles, seven percussion titles including a record six consecutive with the Bushwackers As an individual, he has won three individual snare titles. Possessing extra-ordinary drumming talent, he learned to read and arrange music in order to develop teaching skills to help those around him to become better musicians and corps members.