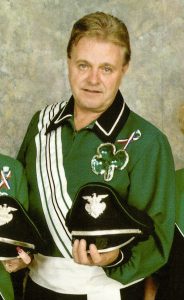 Frank Neill has made a major impact on the activities of Reilly Raiders during two eras and spearheaded the formation of an alumni corps association to benefit this growing area of the activity. In 1956, as a nine-year old snare drummer, he joined the Yearsley Blackhawks, based in the Germantown section of Philadelphia. Taught by Lee Boyes, the Blackhawks were a parade corps in the process of reorganizing following its championship years. On Memorial Day, 1959, his corps assembled next to Reilly Raiders in an Acme parking lot for the parade down Germantown Avenue. He knew instantly he would become one of them. In 1961, he left Yearsley to join the Ridley Park Rangers to compete on the field. The corps went to the national championship contest in Minneapolis, Minnesota the following year, launching him into a level of competition that he had never before known. When the corps ceased operations in late May 1964, he and a dozen friends joined Reilly Raiders. It was too late in the season to learn the drum parts, so he marched in the rifle line. The following year, Reilly introduced a drum line featuring five snares and five tenor drums, which was undefeated that season. He served in the United States Air Force from 1966 to 1970. He rejoined the Reilly organization in 1994 when plans for the Reilly Raiders alumni corps were being finalized. He became director of the board in 2003, helping Reilly advance to a new level of activity including its first appearance in this year’s Drum Corps Associates (DCA) Alumni Spectacular in Rochester New York on Labor Day weekend. Also in 2003, he organized a meeting of 23 alumni corps to create an association. The business model introduced then is still effective and is being used in reviving Alumni Drum Corps Associates.