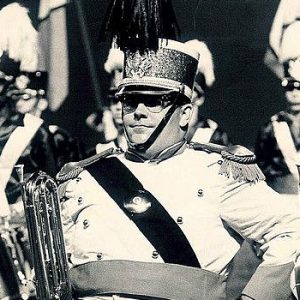 Tom Peashey has been participating in all phases of the drum and bugle corps activity for more than 50 years. Since first performing as a soprano and French horn player with Oswego Pathfinders and Mexico Grey Barons in the 1950s, he has been an instructor, corps director, circuit administrator, judge and contest announcer. For many years, he hosted a weekly drum corps radio show in Central New York and in 1974 was the color commentator of the first ever Drum Corps International (DCI) championship television broadcast on PBS. As chief financial officer of Rochester Patriots from 1979 to 2002, he helped guide them to a DCI Division II world championship and his Gates Center Bingo was named one of the top 10 halls in North America by Bingo Managers Magazine. He was appointed director of operations for the Northwest Youth Music Association and the Seattle Cascades junior drum and bugle corps in 2005. He was director of marketing and public relations for Drum Corps Associates (DCA) from 1994 to 2005. He has been corps director of the Rochester Crusaders, a member of the board of directors of the Syracuse Brigadiers, co- founder and co-director of the Oswego Black Knights as well as visual chief judge for New York Federation of Contest Judges and Drum Corps Associates. He has adjudicated numerous drum corps, color guard and marching band championships including seven DCA world championships. While performing on the field for more than 20 seasons, he played French horn, mellophone or soprano for such well-known New York corps as Rochester Crusaders, Syracuse Brigadiers and Fulton Gauchos. He was elected to the Rochester Crusaders and Northeast Color Guard Circuit Halls of Fame and was awarded a lifetime membership in the Syracuse Brigadiers Alumni Association.