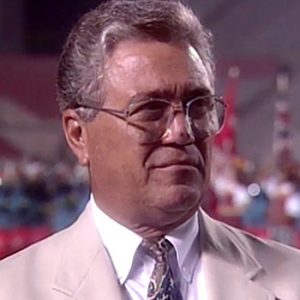 Don Pesceone was named executive director of Drum Corps International (DCI) when the organization was formed in the 1973, and served in that position until 1994. He worked closely with Hall of Fame member Pepe Notaro to establish the A/A-60 divisions in DCI, to allow smaller units to compete for an international championship with other corps of the same caliber. His drum and bugle corps activity included playing French horn with the Mel Tierney and Skokie Vanguard junior drum and bugle corps in the Chicago area and the Winfield Scott Rebels senior corps of Maywood, Illinois. He has been a marching instructor and designer for the Vanguard, the Argonne Rebels and Salina Silver Sabres of Kansas and Stockton Commodores of California. He was business manager of Skokie Vanguard in 1961 and 1962. He was a marching and manoeuvring judge with the All American and Central States Judges Association. When he was hired to be DCI’s first executive director, the headquarters consisted of his desk at home and a few files. He gave up his regular job to build DCI, a considerable financial risk for his family, which included his wife Mary and three young children. Mary became the first important staff member of DCI, taking on the positions of ticket seller, secretary, cook, office manager, director’s liaison, chauffeur, contest coordinator, tabulator, shipping and postal clerk. Both Don and Mary Pesceone are members of the DCI Hall of Fame.