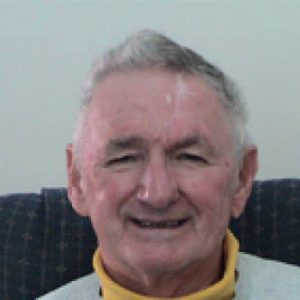 Len Piekarski was a snare drummer who began marching in 1933, at age 7, with the Palmer Sons of the American Legion (SAL) drum and bugle corps of Chicago. He eventually marched with four different SAL drum and bugle corps. His longest involvement was seven years with Gladstone SAL. His drum corps involvement was interrupted while he served in the United States Navy for two years, including 19 months on a light cruiser in the Pacific Ocean. Following his service, he marched for one year with Commonwealth Edison. He wrote the drill and played in the snare line with Skokie Indians from 1952 to 1960, his last year as a marching member. During that time, the Skokie Indians won the American Legion (AL) national title three years in a row: in Miami, 1955; Los Angeles in 1956; and in Atlantic City in 1957. He was the long-time drill writer and instructor with the Chicago Cavaliers. During the period he taught drill, the Cavaliers attended 20 national veterans’ conventions, winning 10 national championships, nine second place awards, and two third place awards. The Cavaliers were selected as the best junior corps of the 1960s by the World Drum Corps Hall of Fame. The other instructors during this period were Sal Ferrera on horns and Frank Arsenault on drums, a trio widely considered the most successful instructing staff in drum corps history. All are members of the World Drum Corps Hall of Fame. Seventy years after the first summer he marched, he instructed the Chicago Royal Airs alumni corps, riding in the bus all the way to Scranton, PA for the corps’ performance during the Drum Corps Associates (DCA) Alumni Classic concert at Lackawanna County Stadium, during the DCA world championship tournament on Labor Day weekend.