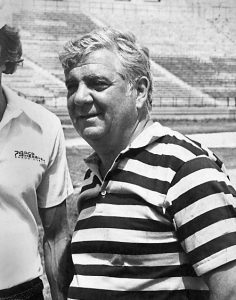 Mickey Petrone was already a legendary drum corps figure as the Golden Age of the 1950s was dawning. During more than 50 years in the activity, he taught, judged and wrote drill routines. He was corps director of the St. Vincent’s Cadets, of Bayonne, NJ and guided them to many state and national titles, including both the American Legion (AL) and Veterans of Foreign Wars (VFW) national championships in 1951, 1952 and 1953. He created the Dream Contest, allowing audiences to see corps on the same field that otherwise competed in separate circuits. He was the long time president of Drum Corps Associates (DCA) at the time of his passing in September, 2003. DCA dedicated the 2004 contest season in memory of his many contributions.