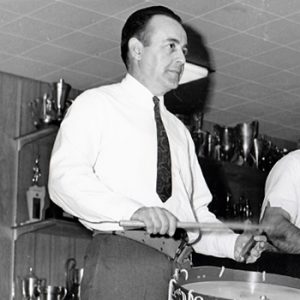 Hugh Quigley was 12 years old in 1934 when he attended St. Francis Parochial School in New Haven, Connecticut and began to play snare drum in the school’s fife and drum corps which had Earl Sturtze as the drum instructor. When his family moved to nearby Wallingford in 1936, Hugh would get up at 4 am on Saturday mornings and walk a mile to the neighboring farm to get a ride to New Haven on a milk truck. The driver provided the free ride on condition that Hugh help load 40 pound milk cans along the way. After arriving at the dairy about 7 am, he would walk around the city for an hour until his 8 am lesson with Sturtze began, followed by the St. Francis practice at 9 am. When practice ended at noon, he would walk 14 miles home. In 1941, Hugh joined the Lancraft Ancient Fife and Drum Corps, one of the oldest and most prestigious groups in Connecticut. During 50 years of involvement, he served as drum sergeant and corps president, traveling to Ireland and Switzerland with the group. In early years of individual competition, he was never able to defeat his friend Bob Redican, but in later years when both were senior competitors he won the Connecticut state title six times. He was also the undefeated American Legion national champion in the senior open class in 1952 and 1953. In total, he earned 62 first and second place medals during his competitive career.