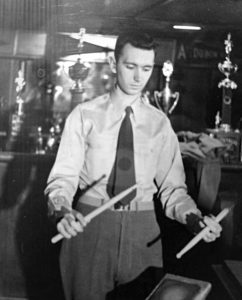 William Reamer started his drum and bugle corps career in Archer-Eplers’ junior corps prior to World War II where he became their instructor and won several individual snare drum titles . He entered the US Army during the war and was assigned to the Army Band. After his Army service, he returned to the newly formed Archer-Epler senior corps and was again their instructor. He became interested in the rudimental style drumming being played in fife and drum corps and believed that it could be utilized in marching and maneuvering corps. He started teaching it in Archer-Epler and The Howard C. McCall junior corps in Philadelphia. He reached early success at McCall when they won the American Legion National Championship in New York in 1947. In 1950 he became the drum instructor for the Audubon All Girl Corps, The Bon Bons. He took on the task of proving that girls could compete on a level with boys. Once again he achieved success as his drummers were winning individual snare, tenor and drum quartet titles at both a local and national level in 1955, 56, 57. and 58. His drum section had the highest score of both junior and senior corps at the American Legion National competition held in Atlantic City in 1957. After retiring from the drum and bugle corps scene in 1968 he organized a fife and drum corps that performed at many events up to and including the bicentennial in 1976. During his retirement he opened a very successful drum shop where he made all types of rope drums and drum sticks for individuals, military Bands and symphony orchestras.