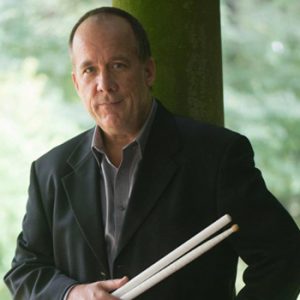 Robbie Robinson is the first drummer ever to win three Drum Corps International (DCI) individual snare-drumming titles. He was the DCI champion in 1979, 1980 and again in 1982. His drum corps involvement began in 1970, with the Tri-Community Cadets. He also drummed with the Keystone Regiment for two years before joining the Crossmen, the corps founded and directed initially by his father. He has also performed in the drum lines of the Blue Devils and Reading Buccaneers. In the 1990s, he began instructing and arranging for a number of top senior corps, including the Buccaneers, Bushwackers, Skyliners and Caballeros. Also during the 1990s, he was a percussion judge with the National Judges Association and Drum Corps Associates. He introduced the triple bass drum stack, first used by Bushwackers in 1992. The previous year, in 1991, he was percussion arranger, instructor and caption head when the Bushwackers drum line won the DCA high drum award.