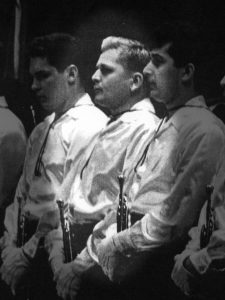 George Rodriguez was a soprano soloist with the Grand Street Boys and the Phoebe Apperson Hearst drum corps in the 1940s. For the following two decades he played the dual role of soprano soloist and horn instructor, first with New York Skyliners then with Hawthorne Caballeros from 1963 to 1971. Throughout this entire period, he also instructed a number of junior drum and bugle corps. He was corps director of the Skyliners from 1957 to 1961. He was also associated with the Eastern and all American Judges Associations.