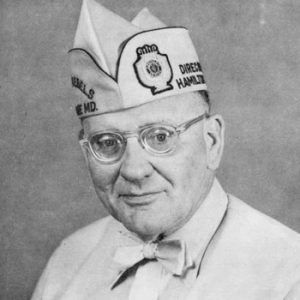 Joe Sedlak first took part in drum and bugle corps activities in Baltimore in the 1930s. He founded the Hamilton Squadron corps, sponsored by Hamilton American Legion Post 20. It became a well-known drum and bugle corps that prospered until World War II. Following the war, he founded the Hamilton Post’s senior corps, which came to be known as the Yankee Rebels. A strict disciplinarian, he was known by corps members fondly as “The Old Man.” He supervised all the administrative roles from 1946 to 1954. In addition to handling business and organizational affairs, he was also the bugle and marching and maneuvering instructor.