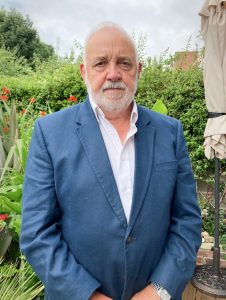 Roger Steele has been a leading figure in the British and European drum corps movement for more than 40 years whose role as a leader in the drum corps community is widely recognized in the United Kingdom. He is a Member of the Most Excellent Order of the British Empire (MBE), an award bestowed by Queen Elizabeth II in 2010. The MBE is awarded for outstanding achievement or service to the community that has had a long-term, significant impact. As director of Concord Drum and Bugle Corps since 1984, he has developed a thriving stage and festival performance section to meet the challenge of performing off the field. He was a founder of the indoor Music Games in the United Kingdom in 2018, served as vice chairman in 2020 and is a current board member. He was a founding member of the British Drum Corps Federation in 1987 and a key leader in the formation of Drum Corps United Kingdom (DCUK) in 1989, serving as vice chairman in the early 1990s. In 1992, he spent the summer with a number of Drum Corps International (DCI) corps as part of a research project with the Winston Churchill Foundation. Established in 1959, the Winston Churchill Foundation was founded by American friends of Churchill, who wanted to fulfill his wish of always having gifted young American graduate students at Churchill College at the University of Cambridge. He was inducted into the DCUK Hall of Fame in 1995. Over many years, he has worked in the background as a mentor to staff members of many new and upcoming drum and bugle corps, helping organizations create and maintain successful operating foundations. With Concord well established as a perennial championship contender he turned his attention to younger participants beginning in 2000, producing another string of championship units. Concord Drum and Bugle Corps won the DCUK A Class championship in 1985 and 2006; British Drum Corps Federation championship in 1987 and 1988; British Drum Corps Federation Winter Guard championship in 1987 and 1988; European Drum Corps championship in 1991. Since the turn of the century, Concord’s youth groups have won several DCUK championships: Cadet Class in 2001; Junior Class in 2003; four straight Junior Class titles from 2015 to 2018.