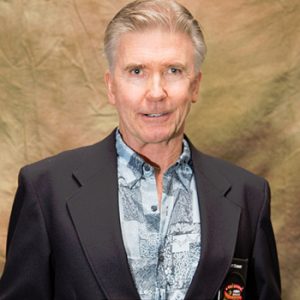 Scott Stewart’s drum corps activities were based in Madison, Wisconsin for 25 years when he served as director of Madison Scouts from 1977 to 2002, but his impact on the drum corps community was felt as far afield as Europe. His association with Madison Scouts began as a baritone player from 1968 to 1974. He was a staff member for the following two years.He served on the Drum Corps Midwest (DCM) executive board from 1982 to 2003, including 10 years as chairman. He also served on the Drum Corps International (DCI) board for many years between 1980 and 2000, including the chair’s position. He co-chaired the campaign to bring the DCI championships to Madison for the first time in 1985. He took Madison Scouts on an 18-day tour of Europe in June 1988, presenting clinics, shows and social events in Germany, the Netherlands and England. He used his management skills to guide the Madison Drum Corps Association out of debt, leaving the organization with a net worth of more than $1 million dollars and $400,000 in reserves when he departed in 2002. By that time, the Association was sponsoring three successful drum corps with total membership of more than 350 young men and women: Madison Scouts, Capital Sound of Madison and Southwind of Lexington, Kentucky. He directed the 2006 Madison Scouts Alumni reunion project including a popular exhibition during the DCI championships. The following year, he became director of Racine Kilties. He was inducted into the DCI Hall of Fame in 1993.