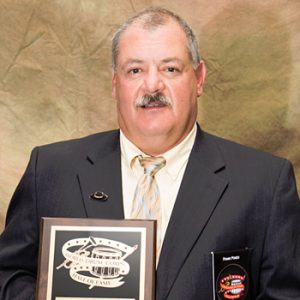 Frank Ponzo has served as assistant horn instructor with some of the best-known drum and bugle corps in North America since the mid 1980s, but is better known to audiences as a dazzling soprano soloist with Long Island Sunrisers, Connecticut Hurricanes and Hawthorne Caballeros competitive and alumni corps. He also performed as soloist with West Sayville Golden Eagles of Long Island for 20 years from 1990 to 2010 while he was marching with both Hawthorne groups. He was the Drum Corps Associates (DCA) soloist of the year in 1994 and 1997 and won the DCA Showmanship Award in 2000. He initiated what has become a Hawthorne tradition when as a member of the Caballeros competing corps he began to attend alumni corps rehearsals to play some of the original music with members who had helped the corps achieve such high levels of success in earlier years. He was a member of the alumni corps from 2001 to 2008, performing and assisting the horn instructor. He began his long involvement with drum and bugle corps activity with the North Bellmore Flames fire department corps, playing baritone and soprano horn from 1976 to 1986. He then served as the Flames’ horn instructor until 1990 while also performing with and teaching the Sunrisers’ horn line. He was inducted into the Buglers Hall of Fame in 2005 and the New Jersey Drum Corps Hall of Fame in 2006.