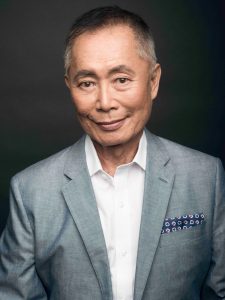 George Takei, the actor, director, author and social activist best known for portraying Hikaru Sulu, the helmsman of the USS Enterprise in the Star Trek television series, was inducted into the World Drum Corps Hall of Fame for Distinguished Professional Achievement during the annual banquet and award ceremony in Williamsport, Pennsylvania. As a teenager, he played baritone horn for the Commodore Perry Scouts drum and bugle corps, which was associated with Los Angeles Boy Scout Troop 379 of the Koyasan Buddhist Temple. The corps was sponsored by Commodore Perry American Legion Post 525 and the Temple. His views about state and local politics, human rights and Japan-United States relations have helped attract more than 10 million Facebook page followers. He has received awards and accolades for his work on human rights and Japan-United States relations, including his work with the Japanese American National Museum. A strong proponent for LGBT rights, he also takes special interest in discussions about immigrants and government immigration policy. He is named after King George VI of the United Kingdom, whose coronation took place just a few weeks after his birth in 1937. During World War II, when he was just five years old, his family was moved from their Los Angeles home to an internment camp in converted horse stables at Santa Anita Park, then to the Rohwer War Relocation Center in Arkansas and then to the Tule Lake War Relocation Center back in California. After the war they returned to Los Angeles. After studying architecture at the University of California, Berkeley he transferred to the University of California, Los Angeles where he received a Bachelor of Arts in theatre in 1960 and a Master of Arts in theatre in 1964. After working in movies for several years, in 1965 he was cast as astro-sciences physicist Hikaru Sulu in second pilot production for Star Trek. When NBC accepted the show he continued as Sulu, playing the ship’s helmsman. Since then, he has also appeared in six Star Trek films. Regular appearances on the science fiction convention circuit take him around the world. He began working in Hollywood in the late 1950s, providing the dubbed English voice for characters in the Japanese monster films Rodan and Godzilla Raids Again. Early in his career, he appeared in several Hollywood movies alongside such actors as Frank Sinatra, Richard Burton, Jeffrey Hunter, Alec Guinness, James Caan and Gary Grant.