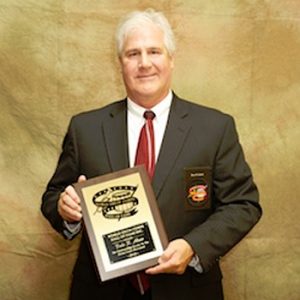 Since first playing a snare drum in 1969, Dale Adair has demonstrated a high level of expertise in many drum and bugle corps categories, including managing, judging, arranging, instructing and performing. He is highly regarded by students and fellow instructors for his creativity, style, enthusiasm and approach to arranging and teaching and for the initiative he has demonstrated in these areas. Members of drum lines he taught were always well prepared and well schooled. His judging opinions were presented in a professional manner and considered by fellow judges to be right on point. He was a percussion judge with the National Judges Association from 1983 to 2005. He began judging with the Cavalcade Judges Association in 2006. He served on the Crossmen’s board of directors in 1993-1994. He has arranged for and taught several highly regarded senior corps since 1982, including Archer-Epler Musketeers, Reading Buccaneers, New York Skyliners and Reilly Raiders Alumni. He was assistant drum instructor with Madison Scouts in the late 1980s and served as arranger and instructor for P.A.L. Cadets, Cramer Hill and the Shadettes earlier. He is an accomplished drummer, winning the first place medal in the first individual snare drum contest he entered. A member of a well-known drum corps family, he started playing snare drum with the Golden Eagles in 1969. Over the following 10 years, he performed with the 507 Hornets and Crossmen, before moving up to the senior category to play snare drum with Archer-Epler Musketeers in 1982 and Reilly Raiders Alumni from 2004 to 2009.