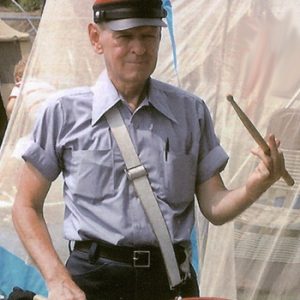 Bobby Thompson of Brooklyn N.Y. was the drum instructor for one of the most accomplished Drum Corps of all time, Blessed Sacrament Golden Knights Jr. Drum and Bugle Corps of Blessed Sacrament Parish in Newark, New Jersey. He was brought into the corps in 1951 by the then second corps director of the corps, Father Robert F. Garner. Bobby continued with “Sac,” as they are affectionately known, through the 50’s into the 60’s and even up through 1970. In 1971 and 72 Jimmy and Marty Hurley home grown drummers of Blessed Sacrament were then writing parts for the corps and the instruction was placed in the hands of the very capable George Tuttle. Tony Sepe another one of Bobby’s home grown Blessed Sacrament drummers helped to coordinate those efforts.

Other well known New Jersey and New York based Junior Drum and Bugle Corps that Bobby instructed, mostly, but not limited to the 60’s, were the St. Andrews Bridgemen of Bayonne, N. J., the St. Patrick’s Cadets of Jersey City NJ, the St. Catherine’s Queensmen” from St. Albans-Queens, NY. and the O.L.P.H. Ridgemen of Brooklyn, N.Y. Senior Corps that Bobby instructed were the Ballantine Brewers of Newark N.J. and the Syracuse Brigadiers of Syracuse N.Y. in 1956 and 57.