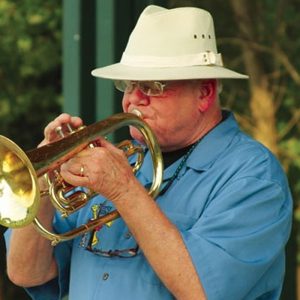 Since 1959, “Corky” Whitlock has been brass arranger for more than 20 corps throughout Midwestern states and Washington state, including Blue Notes, Blue Stars, Buddhist Scouts, Great Northern Railway, Northernaires, Rivermen, St. Paul Scouts and Minnesota Brass. During the same time period, he was brass instructor with more than a dozen corps. His contributions are largely responsible for helping to insure the survival of drum and bugle corps activity through the 1960s and 1970s in northern Wisconsin and Michigan’s upper peninsula.

He was music director and soloist with Minnesota Brass, which he helped co-found, while also serving as show coordinator.

He has also been music director of Rivermen and St. Paul Scouts. He was previously a soprano soloist with Hamms Indians and Laidlaw Torreadores senior corps. He spent a year marching with St. Francis de Sales in 1956 then became a soloist with St. Paul Scouts from 1957 to 1964.

He has been a brass judge since 1964 with Drum Corps International (DCI), Drum Corps Midwest (DCM), Central States Judges Association and the Federation of Contest Judges, adjudicating contests across the country as well as DCI preliminary and final competitions. He was part of the group that initiated female membership in drum and bugle corps activity.

He instituted the mini-corps concept in the Midwest with the Minnesota Brass small corps using traditional and non-standard drum corps instruments in a jazz/big band setting. He is a charter member of the Century College Adult Jazz Ensemble, which has toured in South America and China, performing alongside jazz performers including Clark Terry, Bill Watrous, Wayne Bergeron, Eric Marienthal, Andy Martin, Terry Gibbs and others. He was the founder, leader and mellophone player with the Dirty Shorts Brass Band, a New Orleans styled group.

He is a member of Bugles Across America. He has received the Brassy Award, considered the Minnesota Brass Hall of Fame and lifetime achievement award. He became an associate member of the World Drum Corps Hall of Fame in 2002.