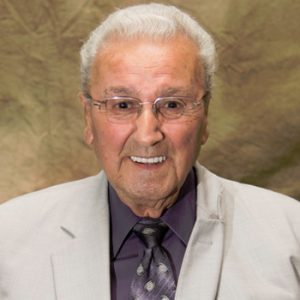 Bob Zazzara’s contributions to the drum and bugle corps movement across western New York span six decades, beginning with the Holley Fire Department drum and bugle corps when he played snare drum in 1950 and soprano bugle in 1951. His activities eventually stretched across the Canadian border when he served as brass instructor of Scarborough Cardinals from 1980 to 1982. He played soprano bugle with Brockport Grenadiers senior drum and bugle corps in 1952 and 1953 and Rochester Crusaders in 1961. His career as an instructor began in 1957 when he was horn arranger and instructor with Salamanca Black Knights. At the same time, he was drum instructor for Hose Company Number 4 drum and bugle corps in Dunkirk. He was also the brass arranger and instructor from 1958 to 1960 while he carried out the same duties with the Black Knights. During the 1960s, he arranged or taught the horn section for a number of corps: Mello Dears all girl junior drum and bugle corps of Owego, Rochester Crusaders, Wellsville Blue Devils, Dansville White Sabers, Owego Kickapoos, Appalachian Grenadiers, and Mark Twain Cadets of Elmira, serving as Cadets’ corps director at the same time. He returned as brass instructor for two of the corps in later years: the Crusaders in 2003 and 2004 and White Sabers from 2006 to 2009. He has judged drum, music and color guard captions for more than 55 years for several organizations, including the Red Carpet Association, Drum Corps Associates, Drum Corps East, Drum Corps International and the Canadian Judges Association. He is a charter member of the New York Federation of Contest Judges, serving as the initial president in 1974, and also judged music for the NY-Penn Judges Association from 1958 to 1961 and the All American Drum Corps Association from 1959 to 1973. During American Legion rules congress sessions, he created the concept of content analysis in the pursuit of developing new judging systems for evaluating field music. He earned a BS in Music Education from SUNY Fredonia, graduating in 1961. In 1966 he earned a Masters Degree in Vocal Music from Ithaca College, where he has been a lecturer since 1992. He has served as guest conductor for concert bands, jazz ensembles, instrumental and vocal concerts at about 200 locations across New York and Pennsylvania. He received the New York State Choral Conductors Association Award in 1997. While stationed in Germany from 1954 to 1957, he was first trumpet player in the concert, marching and jazz bands of the United States Army 2nd Armored Division Band and conducted the band chorus as the same time. He has served as a marching band consultant and instructor many high schools in western New York.