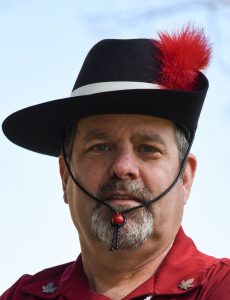 Gord Cupskey came to drum and bugle corps activity relatively late in his music career, which began when he played trumpet with the Galt Kiltie Band in 1980. He joined Preston Scout House Band in 2004 and has been a major factor in the Band’s success ever since. He has applied his skills as a brass performer, arranger and instructor to several Scout House groups, often simultaneously with his involvement in local community bands and such well-known drum corps units as Ghost Riders and Prime Time Brass. He served as Scout House Band field show drill instructor in 2015 and visual designer and drill instructor the following year. When Scout House Cadets required a music instructor on short notice in early summer 2018, he volunteered to help the youth group through a transition period. He founded the Silver Leaves Brass ensemble to give Scout House members and others in the community the opportunity to perform in area concerts and special events, mainly in winter during the drum corps off-season. When Scout House Band scaled back activities in 2017, he enhanced the Silver Leaves to include percussion accompaniment for year round participation in parades and concerts in southern Ontario communities from the shores of Lake Huron across southern Ontario and into upstate New York. Silver Leaves Brass group has been a popular participant in the Great Alliance of Seniors (GAS) annual spring reunions for more than a decade. Preston Scout House Band Inc. includes five performing groups: Preston Scout House Band, Preston Scout House Cadets drum and bugle corps, Silver Leaves Brass, Heritage Drill Team and Magic of Scout House competitive winter guard.