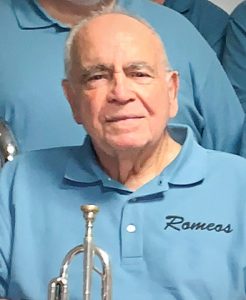 Joe “The Colonel” Brancati has been continuously performing for more than 80 years, beginning in 1940 when he played solo soprano with the Lions Club Junior drum and bugle corps. He also played solo soprano horn with H. Daly Veterans of Foreign Wars (VFW) drum corps, Bill’s Boys and ROMEO Cadets. Along the way, he was instructor for Flagstaff–Perth Amboy in 1945, the first African American corps in New Jersey history. In 1948, he was cofounder, instructor and featured soloist with Amboy Dukes. He won the Interstate Circuit individual soprano title in 1958 and 1959. He has been a journalist with Drum Corps World and Drum Corps Heritage Magazine. He received an award for service, along with astronaut John Glenn, from the governor of Kentucky. He has served in a number of administration positions, including treasurer and business manager for Bill’s Boys. He has been director of the ROMEO Cadets since 1989. He became a member of the Buglers Hall of Fame in 2010 and was inducted to the New Jersey Drum Corps Hall of Fame the following year.