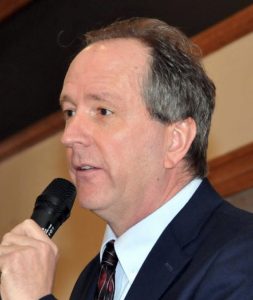 Fran Haring has been the familiar announcer voice at DCA championship and regional contests for 35 years. Many drum corps members have heard him introduce them on the field for their entire marching careers. His professionalism and style elevate drum corps events, raising the excitement level and image of each performance. His voice is familiar at many drum corps ceremonies and formal gatherings. Away from the microphone, he has been a Drum Corps World contributing writer since 1983. He was one of the staff members who produced the DCA Championship Yearbook in 1983, 1984 and 1985. He was publicity director of the Long Island Sunrisers from 1980 to 1982. In addition to announcing every DCA championship contest for more than three decades, he has been at the microphone for such prominent events as the DCA Alumni Spectacular, American Legion National Championship, DCI East and DCI Central championships, National Dream Contest, Drum Corps Grand Prix, Hershey Spectacular, Parade of Champions, Drumfest. He has also emceed such well-known events as the Yankee Rebels Dixie Stinger, Reading Buccaneers Spring Preview, Inter-Service Academy Drum Corps Championships and the 2014 Army/Navy game. On the field, he played French horn/mellophone with Sacred Heart Crusaders in 1971-1976 and French horn with Sunrisers from 1977 to 1983. He was inducted into the Sunrisers Hall of Fame in 2010 and the Maryland Drum and Bugle Corps Hall of Fame in 2021.