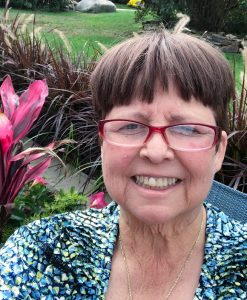 The focus of her drum corps activity for more than 35 years is New York Skyliners. She was part of the administration team that helped Skyliners get back on the competition field. Her extensive performance record with Skyliners includes playing mellophone, French horn, soprano, keyboards. She has even marched in the honor guard. One year, she played half the show in the pit percussion section and half in the horn line. In addition, she has been on the brass staff, assistant drum major, secretary, assistant director, publicity director.

She joined Skyliners in winter 1979 when the corps first allowed women in the horn line. She is the second female, after Louise Mayer, and first female performing member to earn Skyliner 5 and 10 year consecutive rings. She was appointed a lifetime member in 2006 and appointed to the Skyliners board as historian in 2008.

She was a brass staff member for two corps which won DCA Class A championships :Lehigh Valley Chieftains and Skyliners.

She helped two corps merge in England, arranging successful brass shows for Conquest Alliance, which won back to back championships and took the 1987 DCUK high brass award. Her English ties continued on this side of the Atlantic while she served on the United States staff of Kidsgrove Scouts and The Company.

She and her husband Bob received the Endeavour Award for supporting the Company’s 2017 USA tour. She also arranged or performed with Anchormen Brass Ensemble in the United Kingdom for Conquest Alliance’s 20th, 25th and 30th anniversary celebrations

She began teaching brass in 1974, just two years after joining St. Matthias Blue Max. Her passion for performing and teaching led her into music studies and a teaching career, including teaching drum majors how to conduct.