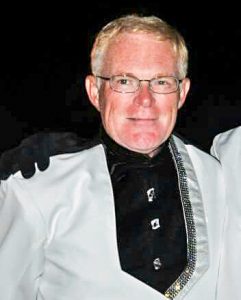 Fred Hall celebrated 50 years as a marching brass section member in 2010. His career stretches back to his early days with Barons of Steuben, of Corning, New York and Seneca Chiefs, of Montour Falls, New York. He performed in Rochester Crusaders horn line for more than three decades beginning in 1968. He also marched with Empire Statesmen and Syracuse Brigadiers. In addition to learning his music and drill responsibilities each year he carried out many less glamorous jobs: lining fields, working at bingo games, driving and repairing trucks and building props. Since giving up marching and performing, he has served as a member of Drum Corps Associates’ (DCA) championship committee.